The Library’s third triennial survey of “in-Library use” confirms it: Lloyd Sealy Library users are a serious group.

And they want to be heard:

What did you do in the Library today? 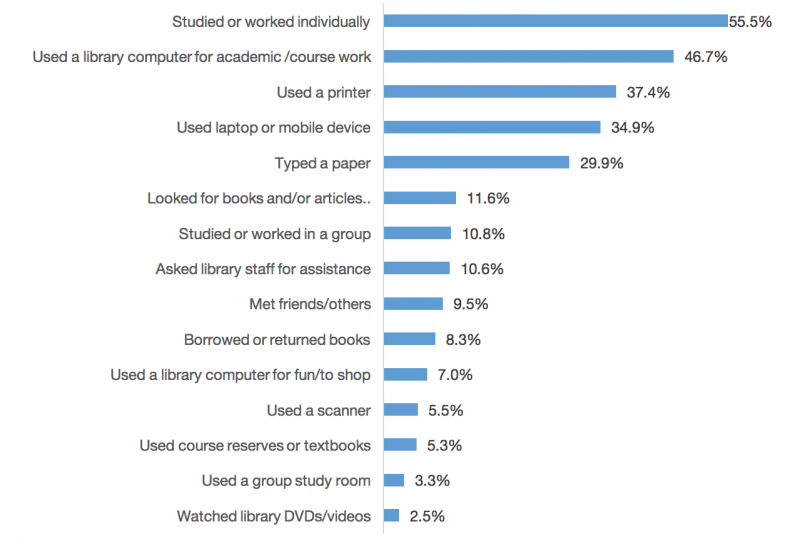 They consider almost all library services to be important to them. On a scale of 1–5, 3.99 was the lowest average importance rating, given to “Tools to facilitate group work.” And they give the Library very high scores on all services. “Quality of databases/electronic resources” was the highest rated (4.47 out of 5) while the lowest rating was given to “Noise level” (3.93).

To find out what was really on students’ minds, though, it is necessary to read their comments. Two hundred forty-one people wrote an answer to the question, “What can we do to make this library better for you?” They made 314 suggestions—all of which were read and categorized. A full 30% of the comments had to do with computer issues and, overwhelmingly, they wanted more: more computers, more access to software on computers, more printers. 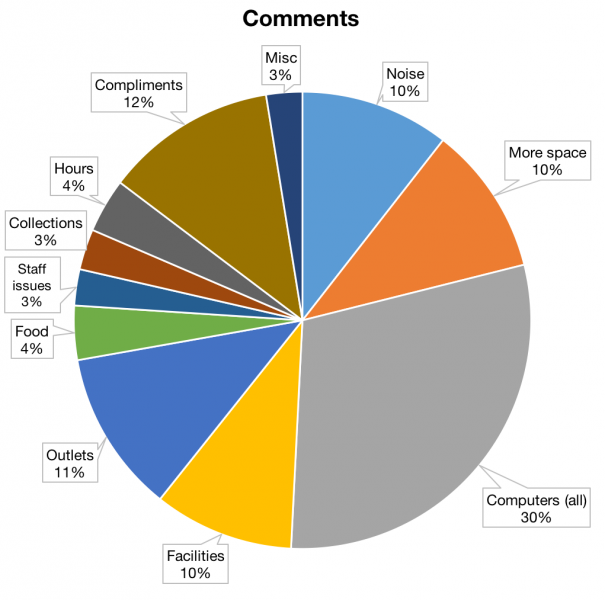 The second major thread in the comments was the need for more electrical outlets—11.5% of respondents to this question complained about the lack of outlets. This is despite the fact that, as a result of the 2013 survey, we rearranged furniture to make carrels closer to existing outlets, added a commercial charging table, built a 12-seat charging bar, and purchased and deployed over 20 small charging hubs.

But 21% of the comments were equally divided between the desire for more space—especially space to study individually—and a concern about noise. There is no doubt that our students want, need, and deserve a quiet place to study.

Compared to the 2013 survey, complaints about staff in the comments were down (only 3% of comments vs. 9% in 2013) and general compliments (“the library’s great!”) were up (12% vs. 8% in 2013). We had identified overcrowding and understaffing during the recently-introduced Community Hour as a factor in the 2013 complaints and took steps to improve staffing. These seem to be working.

Our final question this year was, “If there were to be a major library renovation, what would you like to see in a changed library?” Two hundred twenty-four of our users ventured an opinion. Not surprisingly, the answers mirrored those from the previous question: more quiet study rooms, more outlets, more computers and software. But there was also a desire for a better-looking, more comfortable library with more amenities: new furniture, better lighting, couches, more rooms for group study, more rooms for individual study, a place to eat, better ventilation, a “more modern feel.” Some commenters reminded us of other needs: “sleeping room,” “more green real plants,” “puppy room for stress, college students need this.”

As a result of this most recent survey, we have already added MS Office to more computers in the Library Reference area and have added a new mobile print station downstairs. We have ordered more charging hubs and are searching for places near outlets to deploy them. We are examining ways to increase student seating areas in parts of the Library where older runs of periodicals and law materials have been reliably replaced with online access. 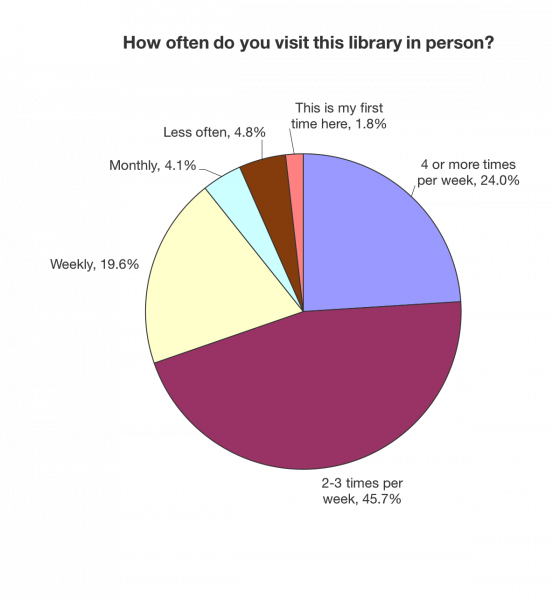 The best news, though, is that CUNY has committed resources to the development of a Master Plan for a complete renovation of the library, and this renovation is now a priority in the CUNY capital budget. Library faculty will be working with architects to come up with a plan that will meet the many student needs expressed in the In-Library surveys.