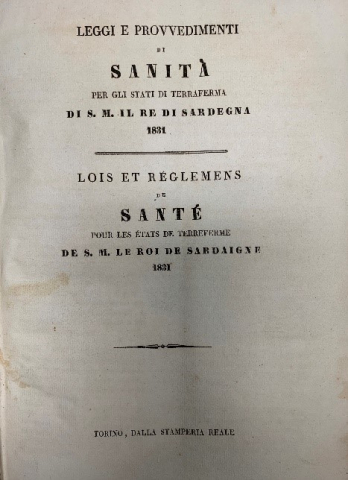 From the Desk of the Chief Librarian, Larry E. Sullivan.

The Asiatic cholera epidemic, or second cholera epidemic as it is sometimes called, spread from India in 1826 to Europe, as well as east to Japan and China. The disease spread west from Moscow in August 1830, and reached Warsaw in the summer of 1831. The disease killed hundreds of thousands of people and was especially rampant in prisons across Europe.  The Sealy Library recently acquired a ‘sammelband” or gathering of a number of printed sources, as well as a manuscript, bound in one volume: Leggi e provvidimeni di sanita per gli stati di terraferma di S.M. il Re di Sadegna 1831/ Lois et règlements e santè pour les états de terreferme de S. M. le Roi de Sardaigne 1831. The letterpress portion consists of over 200 pages that established laws and protocols for prison physicians in the Piedmont area of Italy collected by the physican Giambattista Ferraris (fl. 1820s-1830s) in the town of Biella.  The volume provides a valuable glimpse into the professional preoccupations of prison physicians at the times, which includes special rules for administering drugs, regulating the nourishment of prisoners, tending to the mentally ill, and crucially, preventing and treating infectious diseases, principally cholera.  The document discusses in detail the nature of the disease, quarantining the afflicted and disinfecting their possessions, measures for avoiding becoming ill, and best practices for the policing and maintaining cordons.

At the end of the volume is an extraordinary manscript that suggests Dr. Ferraris treated mentally ill patients in his care. A copy of an address from Dr. Cipriano Bertolini of Torino’s mental hospital, Regio Manicomio,  who first addresses the architecture of the asylum and then discusses the thirty-three potential causes of madness: hereditary condition, alcoholism, head injury, mercury exposure, masturbation, menstruation, pregnancy, and others.  He also mentions moral causes of madness, which include reversals of fortune, overindulgence in politics, maleducation, and a dissolute lifestyle, too much study without exercise, deep thinking on astrological, metaphysical and mystical matters, and even reading novels.  This manuscript is an important step in the argument that insanity had both “moral” and physical/organic origins and in the medical profession’s eventual success in securing a monopoly (as opposed to the interventions of religious authorities) on the treatment of insanity.

These most important treatises are not known in any United States repository and once again point to the great value of Sealy Library’s collections in the study of the entire field of criminal justice and its ancillary disciplines.