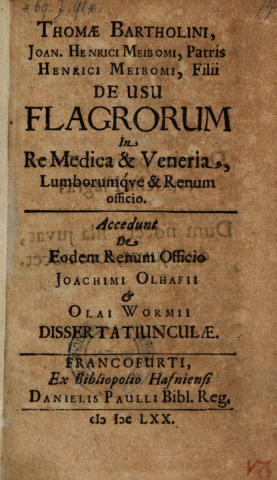 In 1667, Jean-Baptiste Colbert, minister to Louis XIV, appointed Gabriel Nicolas de la Reynie to the newly created position of Lieutenant General of Police in Paris.  Reynie, who held his position until 1697, is considered the founder of the modern police force. At the time, Paris had installed street lights, the first in Europe to do so, and hence comes the designation of Paris as the “City of Light.” Reynie’s charge included policing the “nicer parts” of the newly lighted city. Reynie said that “Policing consists in ensuring the safety of the public and of private individuals, by protecting the city from that which causes disorder.”

Reynie also suppressed the publishing and printing of seditious and salacious or pornographic writings.

But Reynie was also an avid collector of books and manuscripts, especially those of ancient Greek and Latin authors. We have, however, found that he had some other, very different books in his collection.

The Sealy Library recently acquired Reynie’s, personal, signed, copy of the 1670 edition of De Usu Flagrorum in Re Medica et Veneria et lumborum renumque…. (A Treatise on the Use of Flogging in Medicine and Venery), originally written in 1639 by Johan Meibom and Thomas Bartholinus. The latter was a Danish physician who claimed the discovery of the lymphatic system. The book has been called the authoritative text on flagellation for two centuries. Ostensibly, Reynie obtained this copy in order to suppress its printing and dissemination because of its “salacious” content. Reynie had to do his research on suppressing literature by reading such treatises.

The 1670 edition is known in about 23 copies worldwide, but Sealy Library’s copy is unique because of its association with Reynie, the first police commissioner in Europe.

The book had a long history in the history of censorship and even led to a synonym for literary indecency. In 1723, a London bookseller and publisher, Edmund Curll, published an English edition of De Usu… to which he added other “medical treatises.” In 1724 the authorities arrested him for selling this and other titles. He spent fourteen months in prison for this crime. Importantly, earlier in 1718, Daniel Defoe, the famous 18th-century author, coined the term “Curlicism” as the selling of pornography.

Sealy Library’s acquisition of this unique association copy reflects the international breadth and depth of our research collections.