Did Bertha Barton commit suicide, taking her child with her, in the icy waters off Coney Island, or did the nefarious bigamist, Mr. Martin X. Boyce, murder her? An anonymous author wrote about Bertha’s woeful and sorrowful life in the semi-epistolary, semi-autobiographical dime novel Bertha Barton: Or. The Coney Island Mystery, published in 1876 and recently acquired by the Sealy Library in the only American edition. 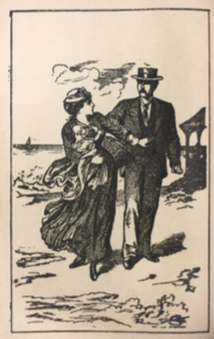 Bertha went to the Twelfth Baptist church in Philadelphia to hear its pastor, the Reverend Mr. Bott, with his “sweet face and musical voice” and “persuasive way of explaining the Gospel,” preach a sermon. Mr. Bott was so eloquent that Bertha converted almost immediately.

It was at the church that she met Mr. Boyce, who seduced her, soon married her in secret (performed by a fake minister friend of Boyce) and impregnated her. Only after Bertha gave birth to Boyce’s child did she find out that he was already married. Next thing, she and her baby were found dead on the shores of Coney Island. Was it murder or suicide? Who’s to say?

This extraordinary New York mystery tale recently found its way to the Special Collections Division of the Sealy Library where it resides among our incomparable rare book collection related to crime and punishment.

Bertha is included in one volume with Life and Death in a Barn! … A True Incident of Centennial City Life. Both novels are extraordinarily rare, found in only three U.S. libraries, and sensationally detail the miseries, poverty, and crime in urban settings during the 1876 centennial year. This most germane acquisition to the collections is another indicator of Sealy Library’s comprehensive and historical coverage of crime and punishment.