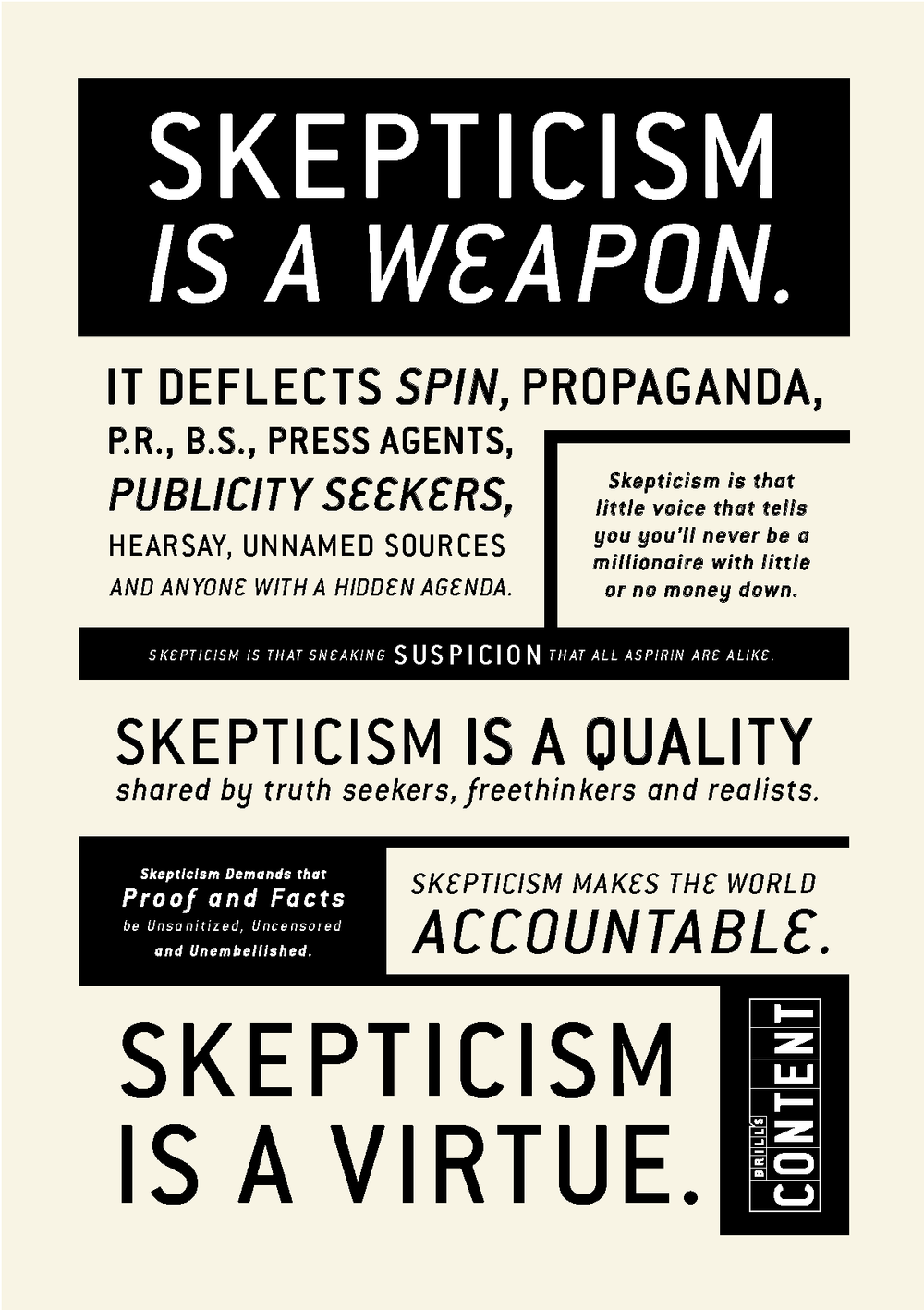 Check out the ad campaign created by Mark Graham (CD, Art Director) with Josh Tavlin (CD) and John McNeil (CD) for Brill's Content: Skepticism is a Virtue. [Thanks to Mr. Graham for granting us permission to use this brilliant graphic].

A LexisNexis search reveals 117 instances of the term “fake news” in headlines from 2012 through 2015. In the first two weeks of March 2017, the number of headline references was 270. This is one small piece of evidence supporting the argument that fake news—recognizing it and contending with it—is currently an urgent and far-reaching issue in the U.S. Until late 2016, the term often referred to parody TV news shows like The Daily Show or The Colbert Report, or more generally about the dangers of the Internet, but the 2016 election season, campaign, and aftermath have breathed new and far more impactful life into what “fake news” means and how it can affect politics and daily life.

Librarians have long been concerned with encouraging the careful and critical evaluation of information sources. It is unfortunate, to say the least, that a new surge of fake news has caused us all to sit up and take notice as never before. Libraries all over the U.S. have quickly put together guides to help students, staff, and faculty sort through what fake news is and how to recognize it. At the Lloyd Sealy Library, we adapted a guide created by the CUNY Graduate School of Journalism (“Fact Checking, Verification & Fake News”), which can be found in the Research Guides link on our home page.

Librarians are not the only members of the faculty capitalizing on this opportunity to emphasize messages that we have long been delivering. Faculty all across the college are addressing the importance of evaluating information sources, especially those who teach journalism and digital media who see how the scourge of fake news can impact the citizenry as well as the education and possible future careers of their students. They take a broad and critical view of the media and its practices as a matter of course.

Professor Alexa Capeloto of the English Department teaches “Self, Media and Society” and a variety of journalism courses. “When the web became more interactive, a lot of us thought that as uncontrollable as this new world was, it would be self-regulating,” she says. “We predicted that facts would win. We didn’t predict that facts would stop mattering. Sure, it’s still worth fighting falsehoods with facts, but I don’t think that’s enough anymore. Messages that reinforce our beliefs are way more powerful and seductive than messages that are true, and they come to us so easily now through the web. I think when it really matters, we should still work to decipher whether information is real or fake, but we should also look at who’s behind the information, how they operate, what motives they might have, and what motives we have in accepting or rejecting it. We have to question ourselves as well as the media.”

Professor Devin Harner, who also teaches journalism courses in the English department, says, “I’m a bit more skeptical than you might expect when it comes to discussions about how ultimately consequential today’s fake news is. I’m far more concerned with sloppy reporting by the real media and with the trend toward opinion and meta-pieces that aren’t grounded in ANY reporting. I can’t help but think that mainstream journalism’s lax standards paved the way for fake news, cost journalists the public’s trust and provided a crack in the foundation waiting to be exploited.” But he offers the possibility that “fake news has been good for real news, because real news can position itself as the cure for fake news, and because it has us talking about news.” Harner believes that fake news is “a symptom rather than a disease. ... And we need to teach media literacy now.”

Professor Capeloto and her colleagues are developing a news literacy module including readings and lesson plans that any faculty member can use and incorporate into their classes.