From the Desk of the Chief Librarian, Larry E. Sullivan 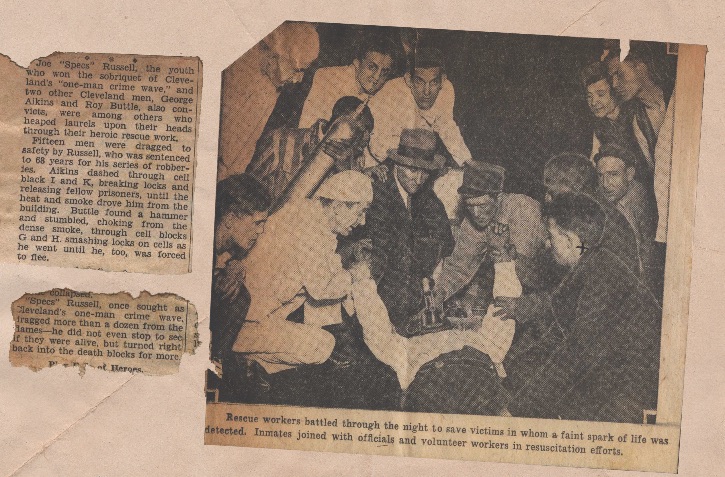 On Easter Monday, April 21, 1930, the most famous fire in American prison history occurred. Flames raged through a locked cell block in the Ohio Penitentiary in Columbus and burned inmates to death in their cells. Did the guards refuse to open the cells when the fire broke out, as reported by many caught in the blaze? We’ll probably never know for sure, but when the prisoners did get free of their deadly cages, order vanished and a riot broke out. The warden called in the National Guard to calm the penitentiary and over 500 guardsmen surrounded the prison. By the time the fire was extinguished, this legendary, calamitous fire killed 322 convicts and put an additional 230 in the hospital.

Doing time at the penitentiary during the fire was the noted African American novelist Chester Himes. Himes, best known as the author of the Harlem detective novels (Cotton Comes to Harlem, A Rage in Harlem, and others, many of which were made into films) with the characters Coffin Ed Johnson and Gravedigger Jones, also wrote the prison novel, Cast the First Stone, which describes the fire, as does one of his first short stories, “To  What Red Hell,” published in Esquire.

Contemporaneous with Himes in that really “big house” in Columbus was Joseph “Specs” Russell, Cleveland’s “smoked-glassed bandit” in the late 1920s, himself a published author during his prison years. Specs was doing a 55-year sentence for committing at least 52 low-yield stick-ups while wearing sunglasses, hence the sobriquet. The Sealy Library recently acquired a significant gathering of Russell’s correspondence and unpublished manuscripts.

Russell (b. 1908 – d. 19—?) started writing fiction and magazine articles early in his prison career as a plan to get early parole. His idea was to get paid for the articles and establish a fund at the penitentiary to pay back his victims. The Pathfinder (1932) wrote that “On hearing of this, a former store clerk wrote him [Specs] a letter asking that he be given ‘preferred creditor’ status in being reimbursed the $8 that he was relieved of in 1927.” He was a prolific writer and had some publication success, at least enough to catch the attention of a number of well-known journalists and others. He wrote such pieces as “Facing Fifty-Five Years,” which appeared in a 1931 issue of The American Magazine and numerous pieces in the magazine of the Ohio Penitentiary. This contemporary literary fame and his bravery during the 1930 fire were rewarded with a parole in January 1941 after 13 years in stir. A number of distinguished writers, such as H.L. Mencken (the “Bard of Baltimore,” known for publishing ex-convict writing in The American Mercury), and such politicians and statesmen as Newton D. Baker (former mayor of Cleveland and Woodrow Wilson’s Secretary of War), wrote in support of Specs. We do not know if Russell and Himes were acquainted, but the Ohio Penitentiary had a reputation for published authors.  The most famous graduate of this institution was O. Henry (William Sydney Porter), who wrote 14 of his short stories while serving time there for bank fraud.

This acquisition points once more to the depth and breadth of Sealy Library’s criminal justice resources.