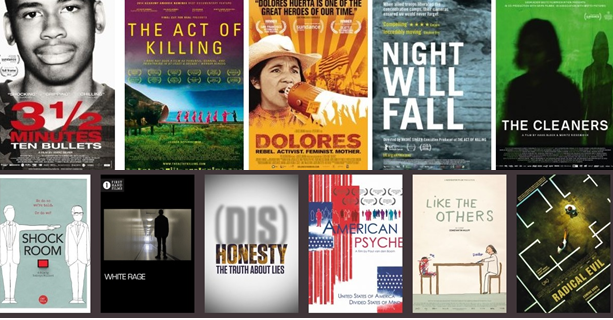 The full catalogue of over 300 contemporary documentaries streaming from distributor Film Platform is now available through the Library.  Many of the films were selected for screening at the Berlinale, Sundance, Locano, SXSW, HotDocs and other festivals.  Each video has a permanent URL (look for the paper clip icon!) that may be shared with students via Blackboard, email, etc.  Off-campus access is available by way of JJ email user ID and password.  Subtitles or closed-captioning is already available for most titles, and may be requested for all.  Adding entire or partial films to course content may improve learning and enrich the course content; please consider assigning documentaries or clips as homework or show in class.

Titles of special relevance to our curriculum include:

3 1/2 Minutes, Ten Bullets (2015).  Dir. M. Silver.  “Stand your ground” is the defense tactic in a Florida trial of a white man for the fatal shooting of an unarmed black teenager outside a gas station.

Death by a thousand cuts (2016).  Dir. J.M. Botero.  A border patrol officer on the border between Haiti and the Dominican Republic is murdered, as protected D.R. forests are illegally chopped down to feed charcoal furnaces.  “This murder becomes the metaphor for the larger story of increasing tension between Haiti and the Dominican Republic over illicit charcoal exploitation and mass deforestation. “

Devil’s bargain: A journey into the small arms trade  (2008).  Dir. S. Saywell.  Gun shows in the U.S. feed the illegal spread of arms around the world. “From dealers, to pilots, to end-users, to the victims, we discover a largely unregulated trade in what has become the globalization of death.”

(Dis)Honesty: The truth about lies (2015). Dir. Y. Melamede.   Behavioral economist Dan Ariely has measured dishonesty in 40,000 people.  This documentary mixes anecdotes from private and public figures with reenactments of Ariely’s experiments and lectures to explore acts of dishonesty and the effects on individuals and society.

Do not resist (2016). Dir. Craig Atkinson.  The militarization of U.S. police departments.

Night will fall (2014).  Dir. A. Singer.   Archival footage and first person accounts of the liberation of Nazi concentration camps.

The act of killing (2012). Dir. J. Oppenheimer.  Fifty years ago, in Indonesia, a half million people were exterminated in a politically motivated genocide.  The perpetrators were never punished.  This is an exploration of the thoughts and actions of some of them, as they reenact their murderous activities in the style of their favorite film genres.  Weird and deeply unsettling.  Received numerous festival awards.

The cleaners (2018). Dir.s M. Riesewieck & H. Block.  Young people in the Philippines are hired by outsourcing Silicon Valley tech companies to watch, identify & label for removal objectionable content.  Implications for their mental health, and some unintended consequences of censorship are explored.

The hunting ground: The Inside Story of Sexual Assault on American College Campuses (2015).  Dir. K. Dick.  “A startling exposé of sexual assault on U.S. campuses, institutional cover-ups and the brutal social toll on victims and their families”.

The Invisible War (2012).   Dir. K. Dick.  Rape in the U.S. Armed Forces.  “An estimated 30 percent of servicewomen and at least 1 percent of servicemen are sexually assaulted during their enlistment, not by the enemy, but at the hands of fellow soldiers.”  Emmy Best Documentary winner.

Thieves by law (2010).  Dir. A. Gentelev.  Explores the evolution of Soviet career criminals into successful Russian “businessmen.”  The documentary follows three notorious, politically well-connected and brutal mobsters as they talk about their path to astonishing wealth.

Walls (2015).  Examines the people & structures guarding the borders of U.S-Mexico, South Africa-Zimbabwe and Spain- Morocco, and those passing through.

Women of Hamas  (2010). Dir. Suha Araff.  The most powerful women in the Palestinian territories, by the director of The Syrian Bride.

Please explore our film & video collections via our guide (guides.lib.jjay.cuny.edu/video)