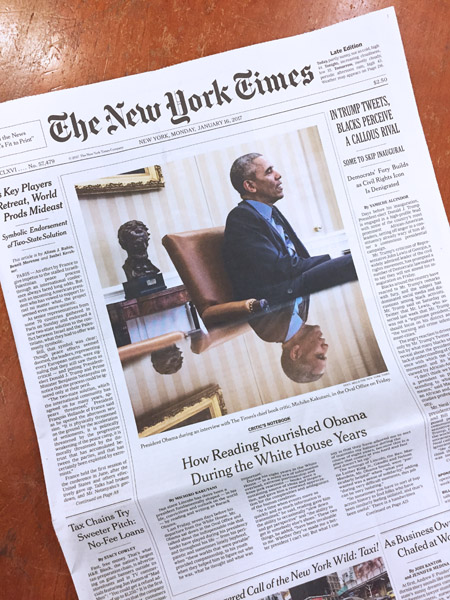 Yesterday, the New York Times published a front-page article, "How Reading Nourished Obama During the White House Years." We have quoted parts of the article where Pres. Obama mentions authors and book titles, and noted where you can find these books at John Jay or across CUNY. For authors mentioned, we've pulled out just one or two notable works, but do check OneSearch to see our full holdings for each author.

Not sure how to find and check out books? Tutorial: jjay.cc/findbookJJ)

The writings of Lincoln, the Rev. Martin Luther King Jr., Gandhi and Nelson Mandela, Mr. Obama found, were “particularly helpful” when “what you wanted was a sense of solidarity,” adding “during very difficult moments, this job can be very isolating.” “So sometimes you have to sort of hop across history to find folks who have been similarly feeling isolated, and that’s been useful.”

Where Do We Go from Here: Chaos or Community?  Ebook link

An Autobiography: The Story of My Experiments with Truth by Mahatma Gandhi. Located at Stacks DS 481 .G3 A34813 1983 and as ebook

Even books initially picked up as escape reading like the Hugo Award-winning apocalyptic sci-fi epic “The Three-Body Problem” by the Chinese writer Liu Cixin, he said, could unexpectedly put things in perspective: “The scope of it was immense. So that was fun to read, partly because my day-to-day problems with Congress seem fairly petty — not something to worry about. Aliens are about to invade!”

Located at BMCC. Request from catalog (by Liu Cixin)

In his searching 1995 book “Dreams From My Father,” Mr. Obama recalls how reading was a crucial tool in sorting out what he believed, dating back to his teenage years, when he immersed himself in works by Baldwin, Ellison, Hughes, Wright, DuBois and Malcolm X in an effort “to raise myself to be a black man in America.”

Later, during his last two years in college, he spent a focused period of deep self-reflection and study, methodically reading philosophers from St. Augustine to Nietzsche, Emerson to Sartre to Niebuhr, to strip down and test his own beliefs.

To this day, reading has remained an essential part of his daily life. He recently gave his daughter Malia a Kindle filled with books he wanted to share with her (including “One Hundred Years of Solitude,” “The Golden Notebook” and “The Woman Warrior”).

One Hundred Years of Solitude

The Woman Warrior: Memoirs of a Girlhood among Ghosts

And most every night in the White House, he would read for an hour or so late at night — reading that was deep and ecumenical, ranging from contemporary literary fiction (the last novel he read was Colson Whitehead’s “The Underground Railroad”) to classic novels to groundbreaking works of nonfiction like Daniel Kahneman’s “Thinking, Fast and Slow” and Elizabeth Kolbert’s “The Sixth Extinction.”

Located in many CUNY libraries: check locations or request from catalog (by Colson Whitehead)

...for instance, he found that Marilynne Robinson’s novels connected him emotionally to the people he was meeting in Iowa during the 2008 campaign, and to his own grandparents, who were from the Midwest, and the small town values of hard work and honesty and humility.

Housekeeping, located in the Browsing Collection

Other novels served as a kind of foil — something to argue with. V. S. Naipaul’s novel “A Bend in the River,” Mr. Obama recalls, “starts with the line ‘The world is what it is; men who are nothing, who allow themselves to become nothing, have no place in it.’ And I always think about that line and I think about his novels when I’m thinking about the hardness of the world sometimes, particularly in foreign policy, and I resist and fight against sometimes that very cynical, more realistic view of the world. And yet, there are times where it feels as if that may be true.”

A Bend in the River

He points out, for instance, that the fiction of Junot Díaz and Jhumpa Lahiri speaks “to a very particular contemporary immigration experience,” but at the same time tell stories about “longing for this better place but also feeling displaced” — a theme central to much of American literature, and not unlike books by Philip Roth and Saul Bellow that are “steeped with this sense of being an outsider, longing to get in, not sure what you’re giving up.”