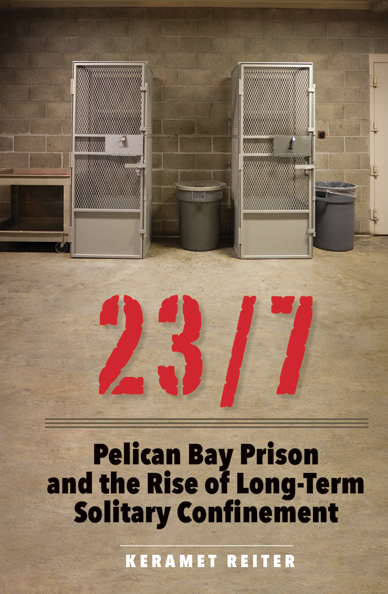 Dr. Keramet Reiter is an assistant professor in the Department of Criminology, Law and Society and at the School of Law at the University of California, Irvine. She received her JD and PhD in Jurisprudence and Social Policy from the University of California, Berkeley and a master's degree in Criminal Justice from John Jay College of Criminal Justice, City University of New York. She studies prisons, prisoners' rights, and the impact of prison and punishment policy on individuals, communities, and legal systems.

Her latest book is titled 23/7: Pelican Bay Prison and The Rise of Long-Term Solitary Confinement. Originally meant to be brief and exceptional, solitary confinement in U.S. prisons has become long-term and common. Prisoners in solitary spend twenty-three hours a day in featureless cells, with no visitors or human contact for years on end. They are held entirely at administrators' discretion, with no judges or juries involved. In 23/7, legal scholar Keramet Reiter tells the history of an original "supermax," California's Pelican Bay State Prison, where extreme conditions sparked statewide hunger strikes in 2011 and 2013-—the latter involving nearly 30,000 prisoners. Reiter describes how the Pelican Bay prison was created—with literally no legislative oversight—as a panicked response to the perceived rise of black radicalism in California prisons in the 1970s. Through stories of gang bosses, small-time parolees, and others, she portrays the arbitrary manner in which prisoners are chosen for solitary confinement, held for years, and routinely released directly onto the streets. Here we see the social costs and mental havoc of years in isolation. The product of fifteen years of research in and about prisons, this book is instant required reading on a topic that increasingly commands national attention.

After the book talk, there will be a book raffle. Dr. Reiter will be available for book signing.

Refreshments will be served at this event.

Sociology Talk presented by the Department of Sociology. Co-sponsored by Lloyd Sealy Library.

Information about this talk comes courtesy of the Dept. of Sociology.