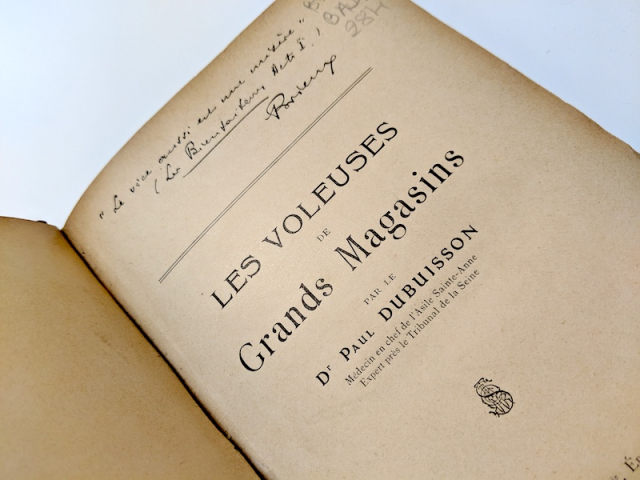 From the Desk of the Chief Librarian

"These monsters in nature, models of hell, curse of the earth, women that dare attempt anything, and what they attempt they care not how they accomplish.” This quote from John Marston’s Jacobean revenge drama The Malcontent (ca. 1603) typifies many of the psychological, biological, anthropological, and criminological views of women’s criminality well into the twenty-first century. In honor of Women’s History Month in March, the Sealy Library acquired two classic French studies on female criminality that are exemplars of this view: Paul Dubuisson, Les voleuses dans les grand magasin [“Shoplifters in Department Stores] (1902), and Raymond de Ryckère, La Femme en prison et devant la mort [“Women in Prison and to Death”] (Lyon, 1898). Both of these books follow such theories as those of Cesare Lombroso, Sigmund Freud, and W. I. Thomas on the causes of crimes committed by women. For example, Lombroso, in his The Female Offender (1903), concluded that criminality among females was an inherent tendency reduced to biological atavisms. He attempted to prove this assertion by using, among other methods, anthropometric analysis to conclude that the cranial capacity of female criminals and prostitutes are more similar to lunatics than to normal women. Sigmund Freud in his New Introductory Lectures on Psychoanalysis (1933) saw women using crime to avenge on men their lack of a penis. W. I. Thomas in The Unadjusted Girl (1923) described women as manipulating the male sex urge for ulterior purposes. In addition, Otto Pollack depicts women as inherently deceitful in his work, The Criminality of Women (1950). We could cite many other theories of female crime in the literature, but most hearken back to our opening quotation from the early seventeenth century.

Our two new additions are very rare French works that fit right into this tradition of theories about the female offender. Sealy Library’s copy of Paul Dubuisson’s work on shoplifting is the only known copy in the United States. The first large department store in Paris was Le Bon Marché, founded in 1838. Dubuisson, a French psychologist, mentions that “a special folly seizes a woman after she crossed the threshold of a great department store.” Even honest women, he goes on to say, are fallible to the “disease of kleptomania.” In 1816, kleptomania was first diagnosed as an impulse control disorder. By the beginning of the 20th century, such Freudians and eugenicists as Eugen Bleuler considered kleptomania among pathological and reactive impulses, and indicated that kleptomania is irresistible and not related to antisocial behaviors. In the twenty-first century many studies have reverted to more sophisticated biological theories of such crimes, a neurobiologic disorder rather than a psychological one. For example, in 2017, the Mayo Clinic reported in a study that two-thirds of kleptomaniacs are women. Today, we often link this crime with biological disorders that link kleptomania with the neurotransmitter pathways in the brain associated with behavioral addictions, including those associated with the serotonin, dopamine, and opioid systems.

Raymond de Ryckère in La Femme en prison… took a Freudian view of female criminality viewing women as “unpredictable narcissistic cats.” He believed that females were much more deceitful than men and more wily. His conclusion was that female judges should adjudicate crimes committed by women because they were “more astute and more pitiless than men.”

These acquisitions illustrate once again the scope and depth of our historical and international criminal justice collections and burnish our reputation as the premier research library in criminal justice in the United States. Such rare French studies, both from the holdings of noted French collector Philippe Zoummeroff, broaden our understanding of the development of theories of crime and are welcome additions to the Sealy Library.