Murder Mystery Challenge a success in its third year 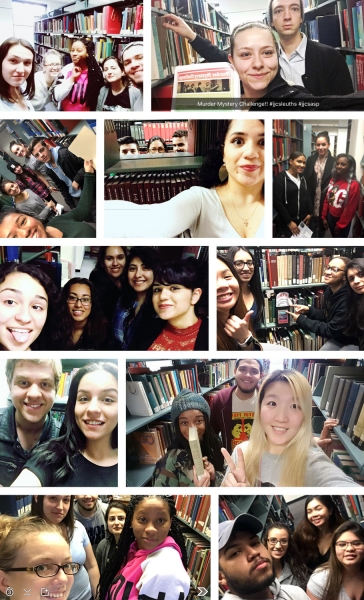 For the third academic year in a row, the Library hosted the Murder Mystery Challenge, in which first-year and transfer students compete in teams to solve a cold case — learning important library research skills along the way. Librarians trained Peer Success Coaches from Student Academic Success Programs (SASP), who went on to lead teams of students through clues in the library. Based on a real murder that occurred in 1921 in midtown, the Challenge requires students to find news articles in the online New York Times archive, follow a paper trail in the endnotes of a scholarly article, locate a book hidden in the stacks, and read a page from the actual trial transcript held in the Library’s Special Collections. Almost all teams answered the main questions correctly. The biggest pitfall in the Challenge was correctly formatting a complex book citation in the APA style, a bonus question. (To be fair, even veteran researchers may have stumbled on that one!)

The students who participated were asked what they learned in the Challenge. “Team work can be beneficial,” one respondent said, echoing an emphasis on team-based learning at John Jay. Another student noted that they learned “where the stacks were inside the Library,” a simple but important piece of information. Participants also offered suggestions for future Murder Mystery Challenges. “Make it a bit longer so that the fun can last a bit more,” one recommended. “Possibly put a fake body on the floor,” another proposed. We’ll keep that in mind!

The winning teams won a VIP lunch in the Faculty Dining Room, thanks to Library support from Faculty-Student Engagement fund. The runners-up won New York Times prize packs and gift cards, provided by SASP. Take a peek at the Challenge yourself!

In the Fall 2015 issue of Classified Information, we wrote about the construction noise that was intermittently interrupting the quiet usually associated with a library. Unfortunately, while the noise has abated somewhat, other construction-related problems have not gone away.

The worst of the problems has been the lack of HVAC (heating, ventilation, and air conditioning) throughout the Library. In order to connect the more powerful HVAC system of the New Building to Haaren Hall, existing HVAC units had to be demolished and rebuilt, a process that was originally assumed would take about five weeks. This work was originally scheduled for Spring 2015 and the outside contractor for the project brought portable air-conditioning units into staff areas and some of the public areas to deal with the anticipated heat of late spring. 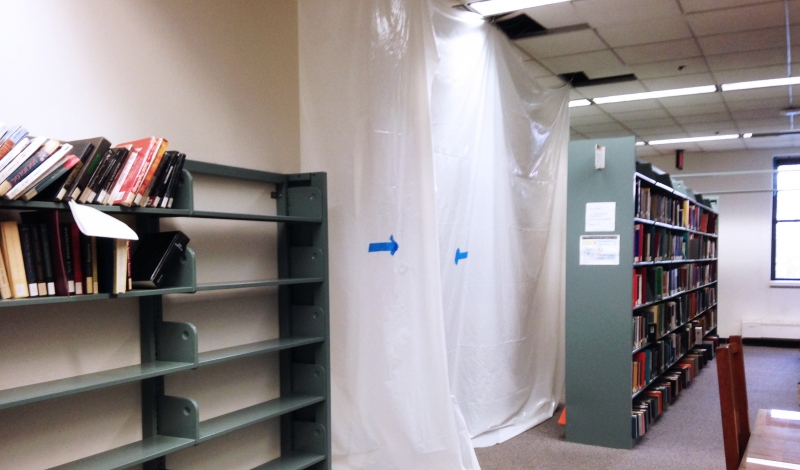 As it turned out, HVAC was turned off on the lower level of the Library (partly below ground) on September 21, 2015 and the portable HVAC units were insufficient to bring temperatures in the Library Technical Services (staff) area to below 78-80 degrees for the entire Fall and Winter.

On the Library upper level—which is more exposed to outside temperatures—HVAC was turned off on November 10. Here, temperatures in both public areas and faculty/staff offices fluctuated from 80+ degrees during some of the unseasonably warm spells this winter down to 58 degrees during the cold periods. Fortunately, our wonderful Facilities staff was able to open some of the Library windows (for the first time in 28 years!) during the worst of the hot times and then close them again when the temperature dropped. It has been an extremely difficult period for both the people who use the Library and those who work here.

Thanks to heroic efforts by the John Jay Facilities staff, HVAC was partially restored during the busiest weekday hours in mid-March—but only to the upstairs Library. As of this writing, there is still no ventilation in the evenings and on weekends. Downstairs, we are still waiting for the completion of the work by the contractor and there is no HVAC at all.

This HVAC work also required the displacement of several thousand books on both the upper and lower levels of the Library, and the elimination of some study areas, so that tables and carrels have been squeezed together into the remaining space.

We apologize for the more crowded conditions that have resulted, as well as for the uncomfortable temperatures that have been inflicted on Library patrons. We assume (wish? hope? pray?) that all systems will be in good working order before the hot days of late spring and summer. Meanwhile, the Library is open normal hours, books are available on the shelves, all student-use computers are working and accessible, electronic resources can be reached from anywhere, and Library faculty and staff are here to help—in person, by phone, email, and chat. 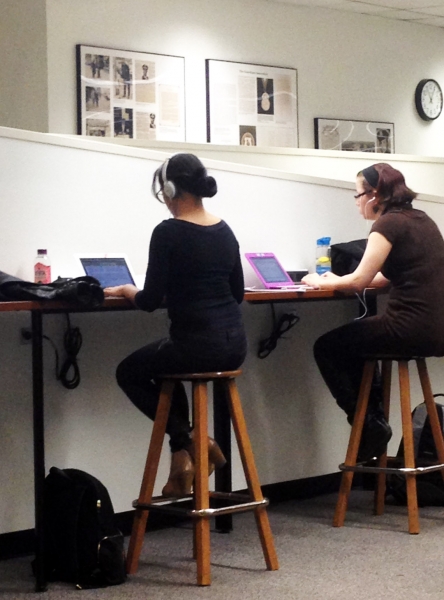 In the fall, unused shelf space in the Reference Area was removed. In its place, a counter with 18 outlets was installed for “power-hungry” students.

In the last three years, the Library has made a conscious effort to provide more outlets to students in the form of tabletop hubs upstairs and downstairs, as well as a charging table equipped with common smartphone chargers.

Last month, the Library conducted its first survey of John Jay faculty in many years. Preliminary results are in: 216 faculty members responded, including 27% of the full-time faculty. Although (and happily) 87.5% of respondents were either satisfied or very satisfied with the Library overall, 90 people took the time to write an answer to the question “How could the Library better serve you and/or your students?” You may be assured that we will be carefully reading all comments and will provide a comprehensive discussion when we have had time to fully analyze all of the results. Meanwhile, if some resource or service mentioned in the survey intrigued you—or you just want to give your opinion about the Library—please feel free to contact any member of the Library faculty. If you want to talk about the survey itself, contact Bonnie Nelson or Ellen Sexton. And thanks to everyone who took the time to respond to the survey.

Ellen Belcher presented her paper Identifying Halaf: Embodiment and Adornment in Sixth Millennium Mesopotamia at the Archaeological Institute of America 117th Annual Meeting/AIA 2015, (session 6C) in San Francisco, California, on January 8, 2016. She also presented a paper Unlearning Function in Prehistoric Figurines: New Methodologies and Theoretical Approaches at the UK Theoretical Archaeology Conference/TAG Bradford, in Bradford, England, on December 16, 2015. Additionally, she compiled and presented a presentation and an exhibit documenting the history of the Fortune Society at a panel discussion on April 11 celebrating the gift of the Records of the Fortune Society to the Library. The exhibit will soon be on view in the Library.

Kathleen Collins reviewed Branded Women in U.S. Television: When People Become Corporations in the December 2015 issue of Journalism & Mass Communication Quarterly and presented “Podcasting, Comedians and the Demotic Turn” at the Southwest Popular Culture Association Conference in Albuquerque in February.

Robin Davis presented “The Library Outpost: Modules, Templates, and Outreach in Blackboard” with Helen Keier (JJ) at Mercy College for the Northeast Connect conference in November 2015. She published “Git and GitHub for Librarians” and “Synchronizing Oral History Text and Speech: A Tools Overview” in her Internet Connection Column for Behavioral and Social Sciences Librarian 34.3 and 34.4. With Mark Eaton (KBCC), she also co-authored “Make a Twitter Bot in Python” in the Journal of Interactive Technology and Pedagogy’s Blueprints section.

Bonnie Nelson published "Improving Reference Service with Evidence" in the open-access journal, Evidence Based Library and Information Practice, vol. 11, no. 1 (2016).

From the Desk of the Chief Librarian

“First in violence, deepest in dirt, lawless, unlovely, ill-smelling, irreverent, new; an overgrown gawk of a village, the ‘tough’ among cities, a spectacle for the nation,” so wrote the Progressive-era journalist Lincoln Steffens in the early twentieth century. He should also have remarked that Chicago was a leader in vice, especially in “white slavery,” or enforced prostitution. One of Chicago’s most infamous “red-light” districts was in the “Levee” in the First Ward run by Alderman Michael “Hinky Dink” Kenna. From 18th to 22nd Streets near the wharves on Lake Michigan, you could find countless brothels, saloons, rough dives, dance halls, and other similar places of entertainment. The issue of white slavery was the object of many Chicago reformers. U.S. Attorney Edward Sims remarked in 1908 that “There is enough to indicate that no other city in America holds and harbors the evil of white slavery as Chicago.” For example, in a two month period in 1907, law enforcement or reformers rescued 278 girls under the age of fifteen from Levee brothels. 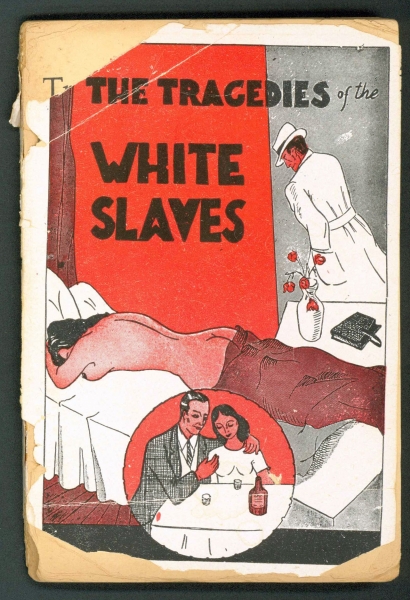 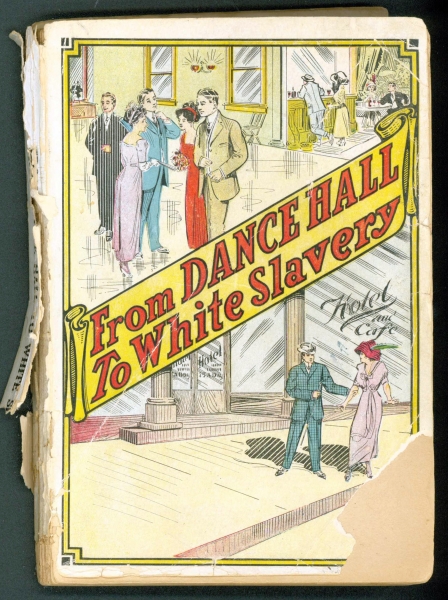 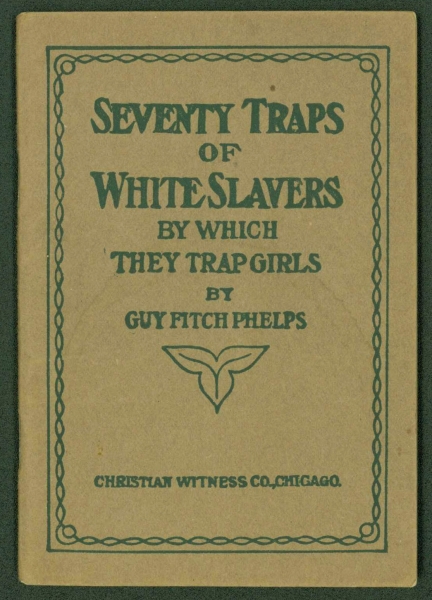 The Sealy Library recently acquired a number of books about Chicago vice, and published in Chicago, with titles such as The Tragedies of the White Slaves (the only recorded copy), From Dance Hall to White Slavery, and the small pamphlet, one of two known copies, Seventy Traps of White Slavers By Which They Trap Girls. The latter offers such tips as “Don’t take music lessons behind locked doors.” “Most all dancing schools are run by white slavers. This is a favorite trap by which they find victims. Beware!” “Never trust the old lady who comes to you.” We could go on, but the Levee fell to the reformers, the passage of the Mann Act in 1910 and the automobile, which allowed vice to move to outlying areas accessible by this new form of transportation.

Today, the “Levee” is a gentrified area surrounding the University of Illinois in Chicago. We are pleased, however, to have acquired such rare evidence of this crime, which adds once again to our outstanding reputation as a research library.

More from the Spring 2016 Newsletter »

The library has just added new titles to its Oxford Bibliographies Online resources providing annotated citations and introductory overviews on a range of topics.  Annotated sources include books, journal articles, websites, data sets and archives. In additon to the African Studies, Criminology, Latino Studies and Psychology bibliographies,  the library now provides access to these titles:

The library now subscribes to this unique database for students and scholars of American History.

Use this database when you need  background information, timelines, photographs, maps, points of view and a plethora of primary source documents on major issues and controversies in American History. The Reserve Lab is now open until 11pm Mondays through Thursdays, thanks to your Student Council.

The Reserve Lab is located downstairs in the Library and offers computers (Mac & PC), printers, scanners, and study tables.

Please note that the Reserve Desk, which circulates books on reserve, will be closed at the usual time.

This evening we'll be having our first walk-in clinic for graduate students. Come to the library classroom between 5-6pm for help getting started on that literature review. We'll be holding several more throughout the semester, so mark your calendars:

Do you need one-on-one help with your research project or assistance finding appropriate resources for an assignment? Would you like to improve your research skills? If so, then drop in and get the help you need just when you need it most. Contact Kathleen Collins with any questions about the clinics.